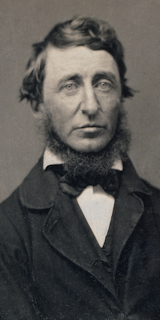 "I, on my side, require of every writer, first or last, a simple and sincere account of his own life, and not merely what he has heard of other men's lives."
-- Henry David Thoreau

Henry David Thoreau was an American author best known for his book Walden and the essay Civil Disobedience. He was also a pencil maker, naturalist, teacher, philosopher, surveyor, and a prominent figure in New England’s Transcendentalism movement during the early-mid 1800s.

Thoreau was born in 1817 in Concord, Massachusetts, where he would live most of his life. The third of four children born to John Thoreau and Cynthia Dunbar, he enrolled at Harvard College at the age of sixteen. While at Harvard, he studied Latin and Greek grammar and composition, and also took courses in a wide range of subjects including mathematics, history, and philosophy. His college costs were paid for by his father with help from his older siblings, John and Helen, who were both teachers at the time.

Upon graduating from Harvard, Henry returned to Concord to accept a teaching position at a local public school. When he refused to physically discipline his students, Thoreau resigned after just two weeks on the job. It was around that time that he took the advice of Ralph Waldo Emerson and William Ellery Channing and began keeping a journal, a practice he would continue for the rest of his life.

Henry and his brother John opened the Concord Academy in 1838. The private grammar school had a policy of no corporal punishment and a teaching style that involved learning by doing, including walks in nature. Although the school was a success, it closed after three years when John became ill and Henry did not wish to run the school by himself. John died with Henry at his side the following year, succumbing from lockjaw which he contracted after cutting himself while shaving.

Following the closing of the Concord Academy, Thoreau worked at his father’s pencil factory during which time he moved into Emerson’s family home where he helped out as a handyman. In May of 1843 he travelled to Staten Island to live with and tutor Emerson’s brother’s family. He hoped that the proximity to New York City’s publishing houses would help kickstart his writing career. But, after six months, feeling homesick and with no publishing deal on the horizon, Henry decided to return to his beloved Concord.

In 1845, Thoreau built a small, single room cabin on some wooded property that Emerson owned near the shores of Walden Pond. Henry moved into his new home away from home on July 4, 1845, a day he referred to as his "own personal Independence Day." One of his reasons for moving to the woods was to begin writing what would be his first published book, A Week on the Concord and Merrimack Rivers.

Thoreau would live in the cabin for two years, two months, and two days working on his writing, journaling his experiences, and exploring the surrounding nature. He travelled to Concord for supplies, would eat with his family frequently, and had many visitors to the woods during his stay.

While living at Walden, Thoreau spent a night in jail for not paying his poll tax as a protest over the state’s financial support of the war with Mexico and the possibility that the state could return fugitive slaves to the south. The incident became the basis for his famous essay Civil Disobedience.

Saying that he had "several more lives to live, and could not spare any more time for that one," Henry left his cabin in the fall of 1847. He boarded with the Emersons for a few months before returning to his parents’ Concord home where he lived his remaining years.

Curiosity on the part of Thoreau’s friends and neighbors concerning the time he spent alone in the woods led to a number of public lectures and his authoring of the book Walden. He finished his first draft in 1847, and over the next six years made six more drafts before the book was published by Tichnor & Field in 1854. Walden received mostly positive reviews, and nearly all of the initial printing of 2,000 were sold within the first year.

After the first printing of the book sold out, the publishers let it go out of print. Thoreau hoped for another printing, but Tichnor & Fields did not publish Walden again until after Henry's death in 1862. Since then, it has remained in continuous print and is still used in classrooms throughout the world. Today, a first edition Tichnor & Fields copy of Walden is worth over $30,000.

In addition to his recognition as a naturalist and philosopher, Thoreau was a vocal abolitionist with strong anti-slavery views, giving a speech in 1854 entitled "Slavery in Massachusetts." Five years later he would pen "A Plea for Captain John Brown," an impassioned defense of the uprising at Harpers Ferry, Virginia in which he condemned the country’s support of slavery.

Henry’s health became more precarious in his final years. Several bouts of tuberculosis prompted a final journey to Minnesota in hopes of a cure or an easing of his symptoms. But, he would finally succumb to the disease at the age of 44 on May 6, 1862. Thoreau's grave is located on Author’s Ridge in Concord’s Sleepy Hollow Cemetery.

Thoreau’s popularity and influence have grown over the years. In the decades immediately following his death he was often viewed as a shadow of his mentor, Emerson. But, by the turn of the century and beyond he came to be regarded as one of the most significant writers and thinkers in American history.